Fukushima Game Jam: when games are stronger than reality

Fukushima Game Jam: when games are stronger than reality 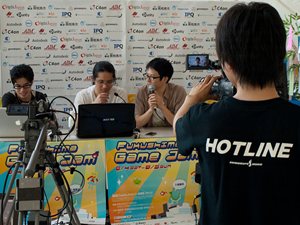 Fukushima? Almost a thing of the past already. The prefecture’s food products legitimately raise concern, but as TV camera crews become scarce, one might forget what the situation is in the areas devastated by the tsunami. Pursuing the unlikely objective of binding video games and support to Fukushima prefecture, the organizers of the Fukushima Game Jam, started last year, came back this August with a second edition in Minami-Soma. Poptronics was on the bus with the developers and spent the weekend at the heart of the event.

Aiming at the same remote goal of restarting Northeast Japan’s economic activity, as well as the nearer objective of breaking the isolation which part of the population finds itself in, the Fukushima Game Jam was held simultaneously in Minami-Soma, Nagoya, Fukuoka and two Taiwanese cities. In Minami-Soma, that game creation competition brought together 60 people divided into 8 teams.
Their mission: make a game from scratch in under 30 hours. 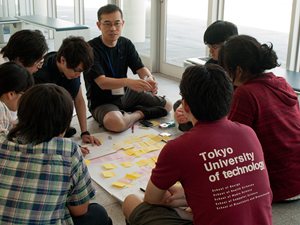 “Last year’s event had to be put together in very little time, but this year we really managed to mix game industry professionals from Tokyo and high school and university students from Fukushima prefecture”, said Kiyoshi Shin, president of IGDA (International Game Developers Association) Japan, the man behind the whole thing. 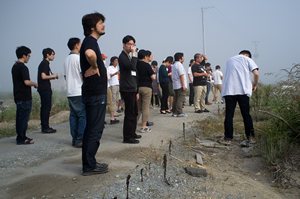 The Jam started with an immersive experience in the field. At dawn, all the participants, freshly arrived from Tokyo, started a bus tour of the tsunami-wrecked areas, up to the limit of the forbidden zone, where the bus finally had to turn back. Collapsed houses, buildings where only the underpinning is still visible, overturned boats washed up yards away from the ocean, still-flooded rice paddies… the traces of the tsunami, allegedly less painful than last year, are far from fading away.

Since April 15th, this area located between 10 and 20 kilometers from the plant is once again accessible to inhabitants chased away by last year’s explosion. Yet they are still not allowed to stay overnight. 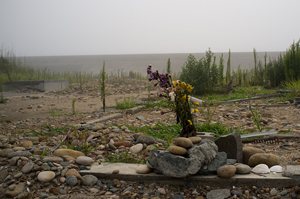 In the light of dawn, the participants navigate their way in the fog and walk up to a seawall half-destroyed by the tsunami. The ocean, which was raging seventeen months before, is now invisible behind the huge concrete wall, but the smell of salt carried by the wind and the roaring sound of the waves leave little doubt as to its presence. Slowly moving forward across this lunar-like landscape, Kensuke Tadano, city counselor of Minami-Soma, remembers the city that used to be there, now hard to imagine just by looking at the piles of rubble and twisted metal and the collapsed graves, the only remnants of the past.

Originally from Minami-Soma, this former NHK journalist moved back to his hometown mere weeks before the tsunami. He tells how the earthquake lowered the soil under sea level, which explains why it is still flooded. He recalls that in the months following the tsunami, 300 to 400 volunteers were coming everyday to help. These days, they are just a dozen. 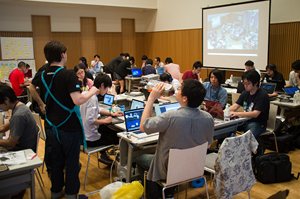 After experiencing the harsh reality, it is now time for the developers to develop. In no time, they settle into the municipal building where the Game Jam is held. Students from Fukushima finally arrive and everybody is broken up into teams. After introductions and the necessary Facebook friend requests, it is time to get to work. The clock is now ticking: only 30 hours left to create a game from scratch around this year’s theme: “Rise”. Each team also has to integrate local children’s drawings in their game. 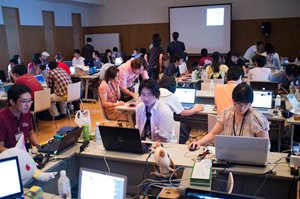 The game marathon has now started, cadenced by meals brought in bento boxes at set times by a nearby store. The room, in turns loud, focused, restless or sleepy, sometimes echoes with a horse’s whinny, a sound effect used in one of the games. On Twitter, Kenji Ono, a representative of IGDA Japan, sets the tone: “No time to change sweaty shirt”. Before spending a sleepless night, each team presents a prototype in front of the cameras, for a podcast streamed live on Ustream (in Japanese, and then in English during the night, for American viewers). Bugs, roars of laughter, and then back to work.

At last the 30 hours come to an end: each team presents their game (all playable here) in front of the 80 participants and staff. There is no ranking; everyone was a winner this weekend, even though they all lost a few hours of sleep.

There is no time to lose: once the room has been tidied up, there is barely enough time for a short drinking session before everyone gets back on the bus to Tokyo. Will there be a third edition? Everyone thinks about the role they would like to play if there were. They also imagine Fukushima back at the top of the news, in a positive manner…

This article was originally published in French on September 6th, 2012

Play!Every game is playable on this page (in English). 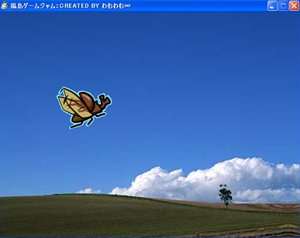 “Rise of beetle”.
One of the most fun games of the Game Jam. Follows the “Rise” theme to the letter. The beetle rises from its tree right up into space. 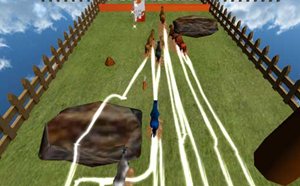 “Kake-agare umadomo”.
Several games from the Fukushima Game Jam use horses, a tribute to the name of the city hosting the competition. The “ma” in Minami-Soma is written with the kanji “horse” (馬). Here, the player has to guide the herd up the hill by throwing carrots. 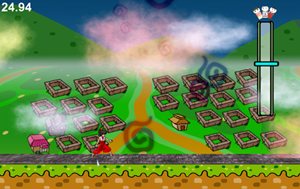 “KiriKiri-Nyokki”.
The cutest game of the Game Jam. A young woman named “Lee-say” (the Japanese pronunciation of “Rise”, this year’s theme) helps to reconstruct the houses wrecked by the tsunami by ripping through the fog with her sword. From the ashes must rise the city (and life). 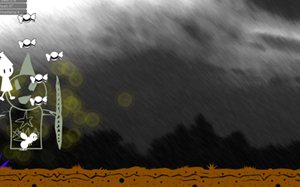 “Nyoki-Nyoki Town”.
A very unique gameplay but a very poetic world. A bee helps a fairy to rebuild a city on a swamp. In Japanse, the word “Nyoki-nyoki” describes the action of rising like a mushroom.